INNOVATION WITH A PURPOSE: NEP BRINGS IP SOLUTIONS TO LIFE FOR CLIENTS AROUND THE GLOBE

This is fourth part of a four-part series on NEP's IP solutions around the world. Be sure to catch Part One, Part Two and Part Three as well.

Quickly convertible to flypacks, these mobile production vehicles enable side-by-side small and/or large outside broadcasts: a boon at events with multiple concurrent games or fields of play.

Whenever we upgrade or replace our infrastructure we always aim to strike the right balance between what the new technology will allow our clients to do vis-a-vis what they actually need it to do. While technology moves faster in broadcasting than in many other industries, the need to make more efficient use of it and our resources is not unique to television.

The point at which we were replacing two existing outside broadcast vehicles coincided with the industry settling on SMPTE 2110 as the transport standard. That meant basing our new trucks on IP was both commercially and practically the ideal way to go. Several of our clients now require 4K production, and although we can provide a baseband solution, it tends to be inflexible and not scalable. Our response was to build two new identical trucks based on IP technology that can be supplemented or enhanced by our new IP-based flypacks, which employ the same technology, and are modular and scalable.

The trucks use the same systems and components and are dual 4K, so we can produce in HDR and 4K simultaneously. With our older baseband technology, it would have been impossible to cover a large event with multiple concurrent fields of play in 4K. But with IP, we can do it because systems scale with ease.

If we take a major tennis tournament, for example, previously we have provided isolated facilities for the courts that fed to a distribution area for other broadcasters. Using IP, our new trucks and the flypack kits will become one complete solution, allowing greater integration of feeds and sharing of sources.

Our new mobile IP system can relatively easily be split into sub-systems for smaller events. Not only are the trucks more streamlined and efficient in use, the flypacks can be assembled and deployed quickly, with considerably fewer connections than their SDI counterparts. The ability to have a couple of smaller systems – or one large system – out of the same equipment enables higher use of assets.

While various innovations enhance flexibility, the reprogrammable IP interface cards we’re using are a huge benefit for clients: the units can be re-programmed to perform various signal flow functions, giving higher utilization. Fewer inter-connects minimize strike times considerably and, again, let us optimize the use of our new assets.

Though we’re not yet at the point of doing everything in 4K, we may be within a few years. The new trucks are a progression and position us to make that change if it comes.

When I take a step back and look at the big picture, IP’s scalability and flexibility are breathtaking. IP allows us to do virtually anything, and it’s hard to imagine a job that’s too large now. It’s been a learning curve for NEP, our vendors and broadcasters, and a career highlight to be at the forefront of what’s literally a new era for the industry. 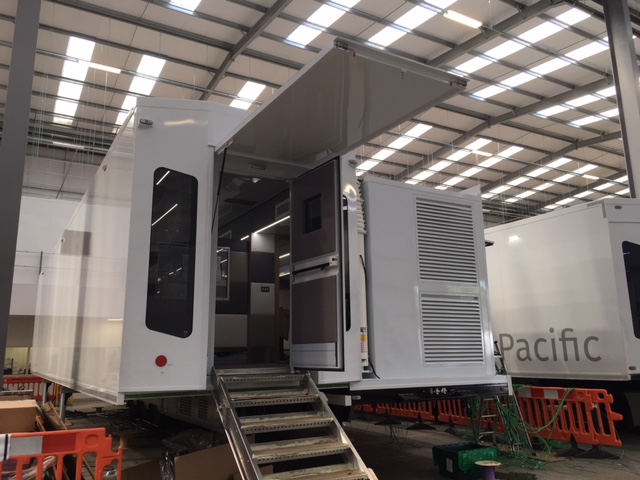