A year-long production on a 600-acre site in the wilds of Scotland was one of the most ambitious projects ever for the facilities companies working on C4’s latest ﬁxed-rig series. Phil Rhodes reports.

Channel 4’s latest ﬁxed-rig show,  Eden, is billed as a social experiment in which a group of 23 strangers try to build a society in the Scottish Highlands. The show is ﬁlmed partly using remotely controlled cameras and partly by embedded camera crew, and the site covers a signiﬁcant part of a remote, 600-acre region of Scot-land’s rugged west coast.

With such a vast expanse to cover, plus the need for the rig to be in place for a year, the Keo Films production made unique demands on the facilities ﬁrms hired to capture and craft footage of the cast’s activities.

One of those companies is NEP UK, the outside broadcast services provider that  also supplies robotic camera systems, semi-permanent studio installations and kit and expertise for ﬁxed-rig shows. Its credits include the C4 series Educating…  and reality formats Love Island (ITV) and Big Brother (C5), but NEP UK commercial director Mick Bass describes Eden as “without doubt the most ambitious ﬁxed-rig project NEP UK has ever undertaken”.

Preparation began in September, with recces by Bass and NEP UK technical manager Trevor Bell. “Based on some of the stuff we’d done with [executive producer] Liz Foley in the past, she called me, so I went up ﬁrst and walked the course and was gobsmacked by the scale of what they were undertaking,” he says.

The core of Eden is the “hands-off experience”, says Foley: “This cast is unproduced. How they choose to spend their days, weeks, months and, ultimately, year is entirely up to them, including where they live.”

That required NEP to build what Bass describes as a “durable yet unobtrusive ﬁxed rig” with video, audio and control technology in a number of locations across the forest.

And because of the requirement for a “hands-off ” approach, minimal intrusion into the area once cameras started rolling was essential. “System reliability and minimal maintenance were key,” says Bass.

NEP worked with the production team to anticipate where best to place the cameras, and ensure there was enough power avail-able to run them. Installation began with power in February this year. Bass credits the director of Initiative-Electrical for extending the national grid about a kilometre and a half. “They took that to the [control room] compound, then pulled three-phase power right into the centre of the forest another 1.5km away,” he says.NEP UK provided the set-up for the  production gallery, 3km from the main site, which housed the master control room, the monitor gallery, sound control, ingest, administration and welfare facilities.

It also built ﬁve hubs that would serve as the nexus for the 45 newly purchased (to reduce the chance of failure), remotely con-trolled Panasonic AW-HE40S cameras, providing power and routing facilities via which pictures would be routed to the control room.

Each hub also dealt with connections from the Sennheiser 416 effects microphones and radio receivers for the cast’s body-worn mics.

Bass is, understandably, reluctant to reveal speciﬁcs of the hub hardware itself. “The value is in what we did before we got there,” he says, referring to the plans made during bi-weekly technical meetings.

Connection of cameras to hubs and then to the control facility was via optical ﬁbre.

The team chose to house each hub in a garden shed to allow technicians to perform equipment set-up and the delicate work of ﬁbre termination in comparative comfort. The conditions would, regardless, affect the tools used to terminate optical ﬁbres.

“We had a deadline to meet and suddenly we were down a ﬁbre splicer,” recalls Bass. After replacing the equipment, around 1,000 ﬁbre terminations were successfully made.

Even camera mounts in the Highlands were a challenge. “The trees fall over,”

says technical manager Jason Spencer, who built much of the equipment as it was deliv-ered to site. “There are four iron tent pegs and we had to drive poles ﬁve feet into the ground because it’s sand.”

Bass says that while rain spots were inevitable, despite having imported weatherproof camera housings from the US, long-term. staining could be a more serious problem, given the reticence of the production to send in maintenance crew. “On the ﬁrst day it started raining, we thought: ‘Oh, here’s the acid test, if this dries all spotty it’s going to look terrible.”

Wireless packs worn by the cast include radio mics, GPS tracking for safety and audio recording to SD cards during periods of no radio coverage. “All these stories sink or swim on the audio. We’ve given them a 24-hour radio pack in a waterproof case,” says Bass. “I wouldn’t say [it’s] indestructible, but it’s been pretty robust.” Built by Wireless Works, these are left in a drop box every night.

Also, says Bass: “There are embedded ENG crews. We’ve given them Canon XF305s, and we’ve got GoPros. There’s quite a lot of card management to go with that.”

By month four, only one XF305 had been damaged. “They had screwed one in the ﬁrst day and a half by getting it very wet and sandy,” says Bass.

Having beaten the weather and terrain, the production used satellite links to get  the footage to Evolutions in Soho for post-production. Only then could they begin the edit and grading process to match at least four types of camera.

The post-production workﬂow was designed by Evolutions head of technical operations Ricky Martin, with an eye on the logistics of shooting “in the middle of nowhere” and a desire to begin editing a couple of days later. These factors drove the choice of both the Canon cameras – for familiarity, portability and replace ability – and the lightweight XDCAM codec used by the embedded camera crew.

Sixteen channels of audio are also recorded, with up to 64 channels at any one time. Using Evolutions’ own Luther ingest system, 48 hours of video material might be generated each day, with another four or ﬁve from the embedded crew and a few minutes’ worth of GoPro footage.

“The actual workﬂow is quite a compli-cated beast, mainly because of distance and remoteness,” says Martin. Each day, H.264 proxies are generated by Luther and sent to London via a satellite provided by Internet Anywhere. Up to ﬁve of Keo’s own loggers begin work a copy of the full-res media is sent by post.

“The duration of the journey changes depending on the weather and whether the postman’s working that day,” says Martin.

As well as the rigged cameras, embedded crew and GoPros, the production shot a lot of drone footage and material with an Arri Alexa for GVs and pack shots.

On location, Evolutions uses Storage DNA. “The reason we’ve gone with that

is so that when series one is complete, we can do a retrieval straight from the LTO using an Avid Log Exchange from the Avid on their request,” says Martin.

Eden’s ﬁrst 4 x 60-minute series,  covering the ﬁrst four months of the year, ended in August. As Broadcast TECH went to press, Evolutions had just ﬁnished the next four-part run. Before the cast and crew return home, Eden is likely to continue testing its cast and crew in ways that can’t be entirely foreseen.

Eden is graded on Baselight under Evolutions colourist Tim O'Brien, who was involved almost from the start of production. "We'd had discussions about how it was going to look... I had a rough idea of what to expect but it was only really once I got the finished sequences that I could see what we had," he says.

The brief was to avoid "anything too stylised that would take away from the reality". O'Brien explains: "The viewer's got to get that these people are in this real environment. The main thing to get across the beauty of the location. one shot can look like Canada, the next the Seychelles. You get these incredible forests then these beach scenes with turquoise water."

O'Brien describes the task as "led by the conditions, so when it's cold and wet, it should feel cold and wet." He adds: "There were times when I kept it fairly cool to allow the mood to develop that things weren't necessarily going so well."

He also matched the notoriously difficult green hues of the foliage. "[Mismatches] can suggest that things have been filmed at different times or eve different times of year," he explains. The grade was finished over "one very long day and a few hours the following day."

"The cut doesn't finish until the night before the morning I get it," he says. 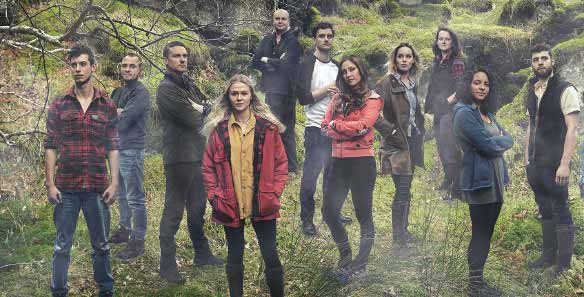